Potency is a measure of activity that generally describes the efficacy of an antibiotic. This measurement is necessary because purity is not a strict indicator of an antibiotics effectiveness on microorganisms.

Caisson Laboratories verifies potency values by a method derived from United States Pharmacopeia <81>, specifically the Cylinder-Plate Assay. An antibiotic of known potency is used in various concentrations to form a standard curve plotted with the concentration (x-axis) and zone of inhibition size (y-axis). The antibiotic that is to be verified is compared against that standard curve to determine its potency. It is desirable that more than one antibiotic of known concentration (the controls) are used. 3 replicates for each control are used to account for variability in microbial assays.

Caisson Laboratories follows the outline below for Verification of Antibiotic Potency:

1. Preparation of dilutions for control antibiotics and testing antibiotic

2. Preparation of sterile nutrient agar that will be inoculated with a microorganism that the antibiotic is effective against

Nutrient agar is prepared and autoclaved to ensure sterility and allowed to cool. Nutrient agar that is favorable for the inoculation organism is used.

3. Inoculation and pouring of nutrient agar into labeled plates

4. Placing of sterile disks on the 6 locations of the agar plate

Sterile disks are placed onto each plate with flamed forceps. These will be the locations of the dilutions of antibiotic.

5. Dispensing of control and testing dilutions onto disks

Dilutions of control and testing antibiotic are dispensed onto the discs in the specified locations. Standard 3 dilutions are present on each plate to account for variability.

Plates are incubated at the appropriate temperature for the amount of time it takes to develop distinguishable zones of inhibition.

7. Measuring of zones of inhibition

8. Statistical analyses of zone sizes and verification of potency 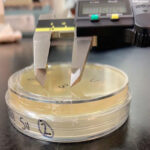 Zone diameters are recorded into a spreadsheet that calculates averages and corrected averages. Regression statistics are run and calculations are performed to verify potency values within a specified range.